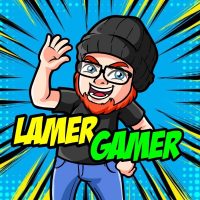 Hi there I’m Jame AKA LamerGamer, a variety streamer from the UK.

I’ve been playing games since the 90s and was brought up on the SEGA Mega Drive, Super Nintendo and then the PlayStation playing the classics like Spyro, Super Mario, Crash Bandicoot, Sonic and Donkey Kong.

Origin Story:
Fast forward 20+ years and for New Years 2020 after a bad year putting a lot of other things like my job and sports before my own well-being I decided enough to was enough and I wanted to do something for myself that I really enjoyed, in this instance it was “Take Gaming seriously” at that point I thought it would be good to document my journey from “Lamer” to “Gamer” and post a monthly blog on YouTube. It was at that point the initial idea of LamerGamer was born!

To become “good at gaming” I decided to pick a game I was already good at which was Overwatch, I attended tryouts for a team representing my city and I made it into the team! We had a good mix of skills and at the time only 2 of us played on PC but we achieved several league victories and before COVID-19 struck we were in the quarterfinals of a prestigious tournament however the tournament is currently on hold due to social distancing etc.

During the lockdown I made various “how to” and gaming highlight videos including how to make my own Gaming PC and a few COVID-19 based comedy sketches with my VERY supportive nurse wife.

As larger competitions had ceased I wanted to channel my gaming and content creating energy into something that didn’t need me to risk breaking social distancing measures. I found Twitch and I’ve never looked back!

I began streaming in May 2020 after playing with it a few years prior but it never really took off, I grinded out Sea of Thieves as I understood it was a popular game and I was pretty good at it, within a month and support from lots of lovely people I’d hit those important numbers to hit the Affiliate status!

A change in mindset:

As I continued to stream various games and more people joined me on my journey I noticed that the original purpose of this journey which was to “get good/serious with gaming” had changed from becoming insanely skilled at various games to now being replaced with meeting new people, having fun and the cliche of “Building a Community” of amazing people!

I stream a lot of different games but alway try and do a scary stream once a week.
I have taken time and learned a lot of do’s and do not’s by watching other streamers and decided that I wanted my stream to be as interactive as possible from fun sound effects and shoutouts for viewers to use to rewarding them when I receive subs, donations etc. With new scenes being added all the time and ideas bouncing around the place for new things to add to the stream.
Whenever someone subscribes to the channel or donates over a certain amount I have to spin the “Wheel of Misfortune” which means I have to do a forfeit which usually involves eating something!

As more people came to the stream I wanted them to feel a part of what was going on as I have seen a lot of streamers be blasé about people contributing to the stream and that doesn’t sit well with me, I know it take a lot for some people to speak up in chat or interact at all! So in order to recognise anyone who wanted to be involved with the stream TeamLamer was created as a place where you don’t have to be the best at games to fit in, you don’t even need to play! You just need to bring a positive and supportive mindset to the Team!

I run a monthly community games night where we all try to play games together like the jackbox party packs, fall guys etc.
As well as playing games during these community nights, as a way of thanking people for their support throughout the month I give away free stuff from the streams sponsors Monthly Tee Club!

It was also on one of these community nights that my wife and I announced we were expecting our first child “Player 3” and that all money raised through streaming will be spent on getting the baby toys etc and the TeamLamer Community has been phenomenally supportive and generous to our growing family!

I have been truly blessed by the people who I have met on my journey to where I am today and I really hope to continue to do this for as long as I can.

If you have made it to the bottom of this and think that the LamerGamer channel or TeamLamer is the sort of thing for you then please drop on in press the Follow Button and say “Hi!”

Take care and see you online